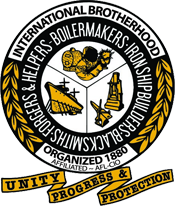 The International Brotherhood of Boilermakers represents 12,000 skilled tradespeople in Canada, providing service to more than 33 locals. This specialized building trade covers a broad and diverse industry that includes ship building and repair, nuclear and utility industries, petro-chemical, chemical, pulp and paper, and oil and gas sectors.

Boilermakers build and repair boilers, tanks and pressure vessels, and are key members of construction teams building ships, ferries and barges, and other large scale projects.

In addition to having one of the best apprentice programs in Canada, the union has established national funds for pensions, health and welfare.

Organized in 1880, the brotherhood represents one of the oldest unions in the United States, initially growing out of the Industrial Revolution and responding to increasing demand for steam power. Since its beginnings, its members and their work have played a key role in important historical events, including helping to build the world’s first nuclear submarine, the U.S.S. Nautilus, and building the machinery to construct thousands of ships to help win both World Wars.